on writing and life 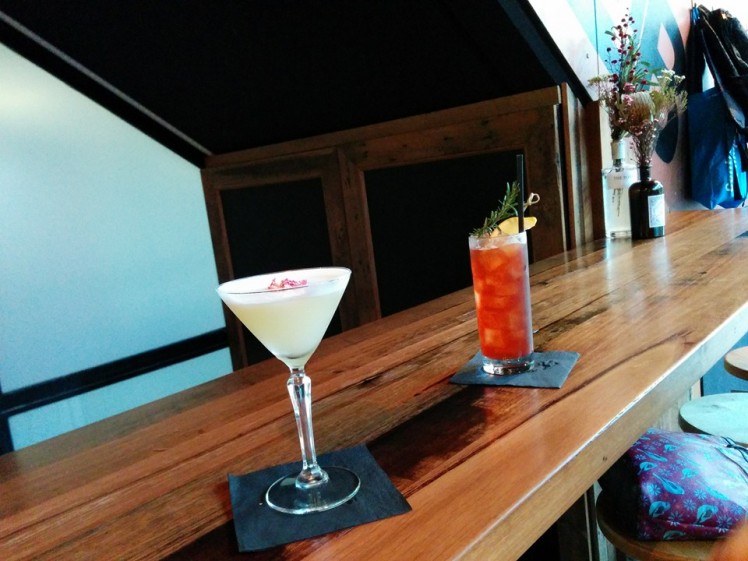 Walking into a bar at the age of almost forty I feel like an eighteen-year old again. It’s been so long I’ve forgotten how to do it – what to order, where to sit, what to do with my bag, how to avoid or return the glances of other patrons. All my long history of nights out drinking, which includes the night on which I met my partner, who is now the father of my baby boy, have dissolved like so much aspro-clear in water. I remember the fizz, but not much else.

The bar across the road from my house has been open a bit over a year; a bit less than the length of time that Jack has been alive.

I made repeated detours with the pusher to walk past before they opened when they were doing the fit-out. I was excited by the whole notion that there would be a bar across the road from my house. I had to check out the light fittings and the stools, I was curious as to how they would manage the weird angles they’d inherited and waited and waited to see what it would be called.

The name, as it often does, came last. 54 Benjamin. It has spawned a whole run of number-themed cafes and restaurants within a three block radius but it was the first and it does it best.

But this isn’t a bar review. I am so far from being capable of impartiality at this point in my life, being out of the house after dark on my own is basically enough to make me wet myself. I know other people have more particular requirements. But I will say – it’s a nice bar.

It is the exact type of bar you would want opening up across the road from where you live. You could dress up to go there or you could just pop in on a whim in more or less whatever you happened to be wearing. It’s small, but not micro. They play good music, but not so loud you can’t talk. You could go there alone and it would be okay. Turn up more than once and there’s a good chance the bar staff will get to know your name. And if you want to spend the money for a cocktail – well that’s what it’s all about.

So, I went to this bar for a drink last Friday with a newly single friend who lives in the next building across from ours in the same apartment complex.

Like magic Jack went to sleep on cue. My phone, which had been playing up, started working again for long enough for us to arrange a rendezvous. Like magic the torrential downpour that had shut everything down earlier in the evening cleared for long enough for us to dash across the road. It all worked. I even had enough money in my wallet to buy a drink, and I determined that there would be no half measures: it would be a nice drink, since I basically don’t ever, ever, ever go out anymore.

And we walked in the door and I felt like a kid. I mean, I’m forty, almost. There were a couple of people sitting at the bar each on their own, there was a group sitting outside braving the cold, there was a bunch of guys in suits sharing a table who all turned and looked at us when we walked in. Well probably at my friend, who’s ten years younger than me, doesn’t have kids and is gorgeous. And I realised then that there was this brief period in my life (actually a good decade and a half) where this felt normal. I could walk in most places where alcohol was served and feel like there was no reason I shouldn’t be there. But now, I don’t feel too old, I just feel – out of practise I guess. I feel like those times are gone and may never come back.

I even wasn’t sure how to properly order a drink. My friend goes there often enough to know what she wanted straight up. I looked at the menu, spent a few minutes reading through the descriptions of the cocktails, unable to imagine what any of them tasted like other than vague impressions– too sweet, too strong.

When I chose one I wasn’t sure what to say.

It was called ‘On the lawns.’

Somehow I made it through this grammatical weirdness and a skinny young guy with a ponytail called Harrison (The guy. I don’t know what his ponytail was called) made me this drink.

There is still part of me that believes that alcohol should not be delicious, and if it is its only to trick you into getting drunk and take advantage of you. I love wine, but wine is wine. It’s good to drink, even great to drink, but you wouldn’t often say it’s delicious. 54B has its own cocktail list, stuff they’ve just experimented with and made up. They keep making the ones that people like. According to the menu, ‘on the lawns’ had gin and pureed raspberry, rosemary and caramelised balsamic. I don’t remember what else it had in it but I can tell you it was goddamn delicious.

I would have drunk it and it would have made me all shivery with enjoyment even without the alcohol content, which really just seemed like a bonus for the price of admission.

One drink. That was all. And my friend and I talked for a bit. Nobody bothered us. We shared our experiences growing up on farms. Being confronted early with the reality of death. Drinking fresh cow’s milk straight from the dairy with cream on it and how much bullshit the notion is that what we get at the shop is actually ‘full cream milk’ because where’s the cream? The fact that both our parents let us roam and explore when we were around the age of five, wandering alone in paddocks out of sight of the house, and how amazing that was, and how insane it seems now, and how glad we both were that we’d had those experiences.

And then I was tired because I’m always tired and she had been up since 4am preparing for a teleconference that didn’t happen so she was tired too, and so we went home again.

First, I resolve to drink more cocktails. More than none at least. Because yum. And because someone invented it, and made it for me just right, and it was pretty as well as delicious and intoxicating.

Second, how good is it just to sit and talk! I had so many long days and nights of conversation when I was young and I don’t think I appreciated that there would be times in my life when conversation would be a scarce resource and something to be treasured and protected. Talking reminds you of who you are, and what you share with other people. Talking reminds you that other people are real, and not just stuff to fill your Facebook feed.

These are all good things.